In Grutter v. Bollinger, the Supreme Court approved consideration of race as one of many other factors in school admissions decisions. But, it cautioned, “We expect that 25 years from now, the use of racial preferences will no longer be necessary to further the interest approved today.”

That was in 2003. This is the Court’s twentieth term since Grutter was decided. 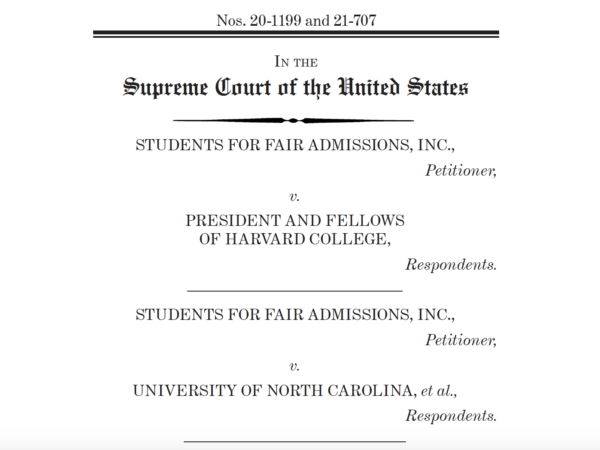 During today’s oral argument in the cases of Students for Fair Admissions v. University of North Carolina and Students for Fair Admissions v. Harvard, Justice Kavanaugh, joined by Justices Barrett and (to a lesser extent) Gorsuch, hammered counsel about whether that 25-year mark is a hard deadline. Justices also asked how to measure the success of diversity efforts and how the Court should respond if “diversity” could not be achieved by race-neutral means at the end of 25 years. Justice Alito also seemed dissatisfied with responses to his questions about, how much diversity is enough, implying the hunt for a “diverse” student body was just a quota by another name.

Justice Kagan tried to flip the script on this, asking petitioner’s counsel, “Is there a limit below which you can use racial criteria?”

Justice Barrett asked Harvard’s counsel, Seth Waxman, whether the university’s admissions policies had changed appreciably in the last fifty years. No, Waxman replied. In that case, Barrett followed up, how should we think there’s an end point? “We’re getting closer,” Waxman insisted.

Near the end of oral argument, Kavanaugh asked U.S. Solicitor General Elizabeth Prelogar whether Grutter meant that racial balancing would be illegal 25 years after it was decided. “I don’t think that’s how the Court understood it,” Prelogar responded. “The Court expected the rate of change would let racial considerations end.”

Meanwhile, counsel for petitioner in the case against Harvard argued that the university never seriously looked for race-neutral alternatives until years after it was sued by Students for Fair Admissions.

Justices Thomas and Alito and Chief Justice Roberts seemed generally skeptical of allowing racial classifications. Thomas repeatedly asked for a clear explanation and evidence that “diversity” offers educational benefits; he was unconvinced by the responses from counsel for the universities.

The Chief Justice asked, doesn’t racial classification make the point that race matters? He does not seem to believe that squares with the concept of equal protection. Cameron Norris, petitioner’s counsel in the Harvard case, played into that concern in his rebuttal comment. Racial classifications cause resentment and are very harmful, he opined.

Justice Alito implied racial classifications were so broad as to be meaningless. He also suggested they were too easily caught up in subjective self-identifications. Although he didn’t go into detail about this, he implied it’s not kosher for the government to go back to racial classifications of the kind used in the Jim Crow era (as in, how much Negro blood is needed to classify someone as a Negro?).

Meanwhile, Justices Jackson (who participated in the case against UNC, although not the case against Harvard, on whose Board of Overseers she sits) and Sotomayor essentially tried to act as counsel for respondents, arguing the cases for the universities. For example, Jackson argued that “Race is never a stand-alone, but one of 40-some factors. [The school is] looking at the full person.” Sotomayor appeared to be constructing an argument that consideration of race is needed to remediate for UNC’s past racial discrimination.

Near the end of the second argument, Justice Kagan asked Prelogar, “Does Brown [v. Board of Education, which banned separate but equal segregation against black people] compel overruling Grutter?” That gave Prelogar the opportunity to argue, “No. There’s a world of difference between excluding blacks and university policies at issue here designed to bring all races together.” A ruling to the contrary would be “profoundly ahistorical,” in Prelogar’s view, in that it would trivialize the harm of state-sponsored segregation.

Kagan seemed to sense the wind from the majority, that it may overrule the Grutter opinion allowing (some) consideration of race in admissions, as a modest exception to Brown and to the Constitution’s Equal Protection Clause.

Here’s another possibility. Instead of overruling Grutter, the Court may reaffirm it, and clarify that 25 years is a hard and fast deadline. It could say, starting with admissions decisions for the class of 2032 (which will be admitted in the fall of 2028 – 25 years after Grutter), consideration and use of race will be absolutely verboten.

[To read about the brief Legal Insurrection Foundation filed in the case, click here.]

This post was first published on Legal Insurrection and was written by Johanna Markind.

Critical Race Training in Education is a project by Legal Insurrection. Your generous donations make projects like this possible. Please click below to support us!
Make a Donation